On [11-09-2012] Facebook Reached the Rank #1 in Alexa, From this days Google had the rank #1 and it always be, But Facebook suddenly got the rank of number one and kick backed the Google to 2nd place, 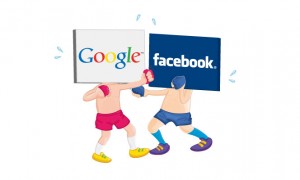 Facebook suddenly got the rank #1 in Alexa, Alexa is an service from amazon,Which giving the rank for all website, they sorting all websites and make rankings, According to Alexa, the site has been ranked, From this days Google stacked in the place of #1 and Facebook in #2, But Google now slightly differed with its rank, Facebook used its chance.

Also Google tries their most effort to retain its rank in first place, because all of the Google products that come around its sub-domain, like gmail, adsense, webmaster, images, maps, play store, Drive etc etc and finally now Google +, the Google plus social networking as been attached to its main domain Google, Even though Facebook covers more users and businesses with its new features, Also it is not a holiday , but traffic and queries of Facebook leads it to rank #1, But is not a permanent change, Because Google knows how to tackle this, if they just redirected local search engine pages for country to US, ( eg: google.co.in to google.com ) they once again got their rank as it is… lets what will occur on Internet race,